Brothers Juniors first field teams in the Brisbane Junior Rugby League competition in 1935. It formed as a club in 1935 to foster to foster the development of junior players. Brothers Juniors owes a great deal to a number of families who have have dedicated their time to ensure the Club strength and ongoing success. This includes the Donaldson, Hickey, McGraw and Munro families amongst others.

In 2005 Brothers Juniors decided to make Gibson Park, where they now reside; their permanent home.  They had trained at Gibson Park for the past thirty years. It is their objective to upgrade the facilities to make it one of the best home grounds on Brisbane’s north side.  2014 saw the opening of the new clubhouse and with 2016 an upgrade of Munro Oval; the main field. Giving Brothers Juniors Rugby League Club the home they deserve.

The club’s player numbers continue to grow of late. This can be attributed to both their excellent facilities and the group of dedicated, hardworking parents behind the club’s success. The club has almost 300 players across all the junior and senior teams. A large number of these players have played over 100 games for the club. Some progressing from juniors all the way through to seniors. This commitment demonstrates the family-orientated community the club tries to foster.

Brothers Juniors celebrated their 80th Anniversary in 2015. Pivotal Motion is looking forward to continued involvement with this great club as it goes from strength and strength. 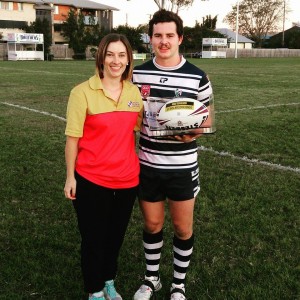 Pivotal Motion Physiotherapy has a long association with Brothers Juniors.  Bobbie-Jo first worked as a sports trainer at Gibson Park in 2005. Bobbie-Jo is now physiotherapist of choice for Brothers Juniors Rugby League Club. We see many of the Brothers Juniors’ boys here in the clinic; Bobbie helping them get back on the field quickly. We also need a large number of parents of Brothers Juniors Players. This is testament to the strong family orientation of the club.

Pivotal Motion Physio assists with supplying a sports trainer to this club during his physiotherapy studies at ACU. Providing immediate first aid management and advice to the boys and their parents.

Ben Munro is heavily involved with Brothers Juniors Rugby League Club. Both as a sports trainer for the younger teams and as a player.

Pivotal Motion Physiotherapy are proud supporters of local sporting teams and athletes. It is the continued treatment that is responsible for keeping players injury free during the season.